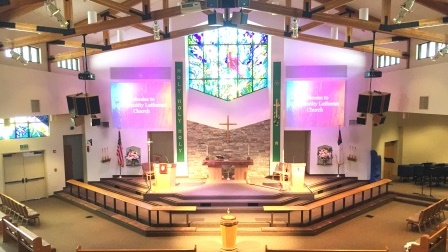 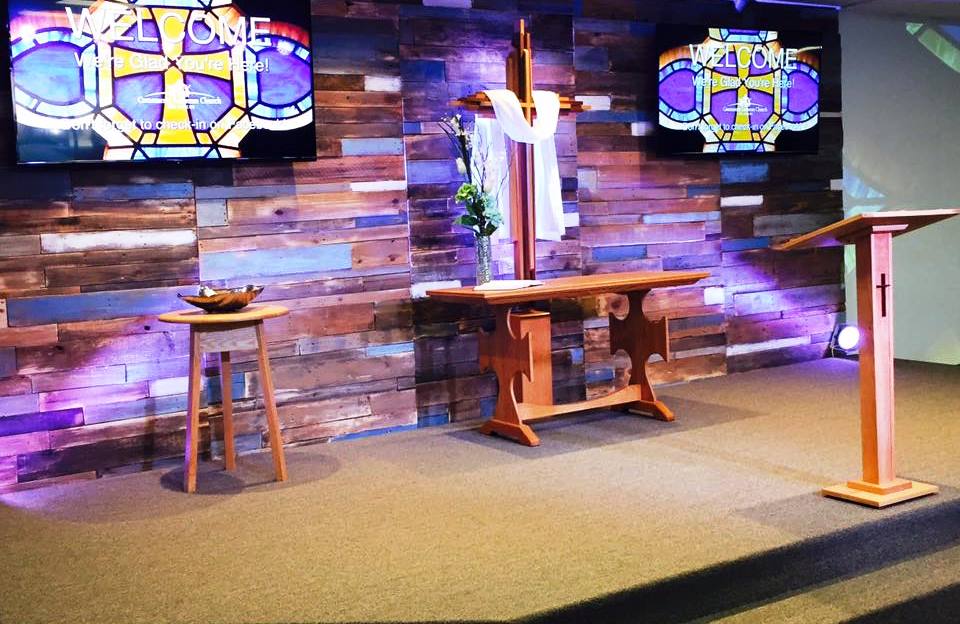 He is Risen! A Reflection on our Easter Services at Community Lutheran Church

“He is risen indeed!”

Each year, Lutherans look forward to the familiar and joyous words of our liturgy that proclaim the resurrection of our Lord Jesus Christ.  But Easter Sundays at Community Lutheran Church often include many other encouraging and uplifting elements!  Read about what took place on Easter Sunday at our CLC campuses in Escondido and San Marcos:

As worshipers began arriving on an overcast Easter morning, many brought flowers to be placed on the flower cross by Donna Hinke and volunteers.  At the top of the cross were Birds of Paradise that were placed in such a way as to resemble a crown.  Outside of the Ministries Building, Curt Euhus, Dan Huhn, and Mike Zsolczai were cooking up omelets for hungry families ready for breakfast.  Inside the Ministries Building, members of the Sr. High youth were serving egg strata, cinnamon toast bake, and fruit.

The worship service featured the Children’s Choir singing “Celebrate” and the adult choir singing “He Lives.”  Musical ensembles are a highlight of Community’s Easter services, as the groups rehearse with Christine Vogelsang for months to bring special music to this most joyous service.  The Children’s Message was led by Jim Meyer, and Pastor Vogelsang preached the Easter sermon, which can be heard at http://www.clcfamily.org/media/sermons/.

Following the first service, families could visit the completed Easter cross and have their pictures taken by Julie Burlington.  Donations were given to youth and young adults attending the National Youth Gathering this summer in San Antonio.  The breakfast donations also went toward this cause, and the total raised between both campuses on Easter Sunday was $1955.00

About 736 people came to celebrate and worship in Escondido for Easter, including many guests who we hope to see again soon!

This was the second year that our church has held Easter services in San Marcos, and with an attendance of 105, we exceeded last year’s attendance by 25%!  The morning began with exuberant worship led by James Calkins and our praise band atop a lily-lined stage, and it was followed by the baptisms of Sunshine Berry and her young sons Jackson and Jacob.  Christians have traditionally held baptisms on Easter Sunday because baptism joins us in Christ’s death and resurrection:

“Or don’t you know that all of us who were baptized into Christ Jesus were baptized into his death?  We were therefore buried with him through baptism into death in order that, just as Christ was raised from the dead through the glory of the Father, we too may live a new life.  For if we have been united with him in a death like his, we will certainly also be united with him in a resurrection like his.” Romans 6:3-5

A meaningful video testimony was shared and served as a reminder that God can use the church as powerful witnesses in the world to bring people into a relationship with Him. The family was given a baptism prayer square, a Beginner’s Bible signed by worshipers present that morning, and a baptism blanket. 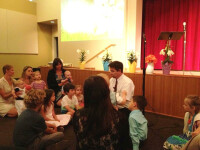 The adult choir sang “Salvation is Here,” and Chris Ryan led the Children’s Message.  The Easter sermon by Vicar Joel Beyer was the final sermon in the series, “Pushing Daisies: Dying, Resting, and Rising.”  Because Jesus rose, there is nothing for us to fear in this life!  The series can be found on our church website at http://www.clcfamily.org/media/sermons/.

Following the service, we held our first Easter brunch in San Marcos, which served as a fundraiser for the youth and young adults attending the National Youth Gathering.  Brunch was prepared by a couple of culinary experts, the experienced Dick Andersen who prepared egg strata for the adults and new-member Tim DePascale who made pancakes for the children.  David Kruest took photos of families in front of our cross and printed them for families to take home.  Rebecca Ornelas organized an Easter egg hunt for the children, and although it seemed as though there were far too many eggs at first, we were surprised at how quickly they were snatched up by little hands! 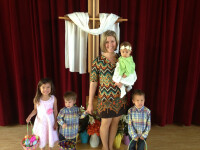